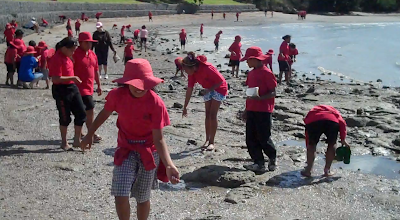 While the wind was blowing and the were waves rolling at the reserve, Pt England school was making their way down to Pt England Reserve to have a fantastic picnic. Kids were playing on the beach, maneuvering around the slippery and gluggy clay and rocks, as well as trying to turn the rocks over to find the crabs underneath.

In the meantime my friend Nathan and I (Calvin) were making things out of clay like clay cannon balls and skulls. Later on Nathan and I went to have some rock melon,Nathan did not want any because he said he vomited when he ate it.

Dying to go to the toilet, the portaloos arrived and I was relieved. Then the time had come to pack up and return to school.
Posted by Ms Squires at 14:18 2 comments: