The extension group were lucky enough to have a video conference with a well known New Zealand geologist the other day. The were able to ask many questions about earthquakes and found out a lot of information. They wrote about their experience on their blogs. Here is Selena's recount. 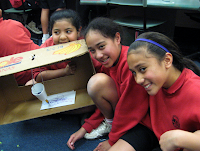 In the morning the whole extension class had a video conference with a famous Geologist named Hamish Campbell. We were talking to him about the earthquake that happened in Fiordland this year. To prepare for our conference with Hamish Campbell, we made Seismometer.
He told us that it happened at 9pm and it was on the 16th of July. On the north island the Pacific plate was going underneath the Australian plate , but on the south island the Australian plate was heading underneath the Pacific Plate. It lasted 30 seconds and no one was killed, but it was measured by a Seismometer and it measured 7.6 in magnitude , the biggest earthquake worldwide in 80 years.
Speaking of earthquakes I am going to tell you about an earthquake that happened in China in the city of Tangshan in the year of 1976. It lasted 15 seconds and it killed 242,000 and around 50, 000 people were injured. It was recorded as 7.8 magnitude. The reason that so many people die in earthquakes is because they are really dangerous because they happen so fast and they do not have warnings like for e.g Volcanoes , and Tornadoes. Other kinds of disasters have warnings.
The facts that I mostly liked was when Hamish Campbell told us that in the earthquake was felt in New Plymouth. Another fact that I want you to know about is that the Plates that are covering New Zealand are not in a circle shape they are in any different shape.
Last term we were learning about Dinosaurs and Joan Wiffen was part of our important project but just today Hamish just told us that she passed away. She passed away on Tuesday at the Hastings Hospital.
Thank you to Diana Grace and the Te Papa Museum. Huge thanks to Hamish Campbell.
To find out more try clicking on any of these links:
Hamish Campbell
Fiordland
Joan Wiffen
Seismometers
Te Papa Museum
Glossary:
Seismometer: A Seismometer is a instrument that records the intensity of an earthquake.
Posted by PES Blog at 12:38