This is a small part of the story "Hansel and Gretel"retold by Room 15. We have been learning new vocabulary and ways to make our sentences and paragraphs more interesting for a reader. We used what we had been practising to write this together. 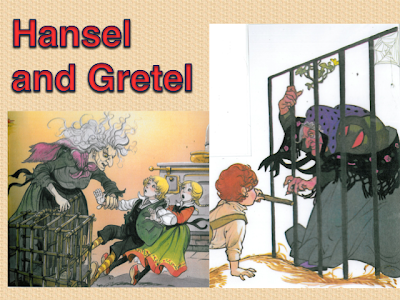 Suddenly the evil witch captured Hansel and thrust him into a tiny cage. “Let me out!” pleaded Hansel, but to no avail. The witch just cackled, “Hee hee hee. I’ve been looking for a boy like you. Eat up. I want you to become plump and appetising for my feast.”
She handed him a plateful of delectable and scrumptious sweets and pastries which Hansel was unable to resist.

Some weeks later the hideous witch approached Hansel in the cage. With a sly grin spreading across her face she snarled, “Hold out your finger you little rat-faced weasel to show me how fat you’ve become.” But despite quivering with fear Hansel had come up with a cunning and clever plan. He held out a scrawny chicken bone to show her knowing that she was gullible and had failing eyesight.
As the witch grasped the chicken bone she shrieked, “Blast! You’re even skinnier than before.”
Posted by PES Blog at 17:34